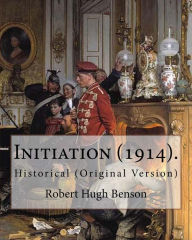 In Msgr. Robert Hugh Benson’s novel, Initiation, there is an overriding theme which penetrates into the purpose, value and necessity of suffering. Who better to prove the importance of suffering than a character who would rather turn away and pretend like it does not exist?

Nevill Fanning is forced to suffer. The thing that makes it so miserable is the fact that he loathes it. The same Hound of Heaven as in the classic poem is on Nevill’s heels as he dodges the spiritual, psychological and physical blows of tribulation which he faces.

The title of the novel seems to be a strange choice as nothing looks like the start of anything until the very last chapters.

The story is like climbing a steep hill. The climber feels like no progress has been made until he stands at the summit. Looking down he realizes that his very first step was the start of the finish. Nevill becomes initiated into a sincere Catholic through his learning how to suffer.

Nevill is a happy optimist who ignores suffering rather than facing it. Nevill is forced to suffer physically due to his failing health. Like all Robert Hugh Benson characters, Nevill is a British person who lives in a peaceful England before it is shaken by the First World War. At first Nevill feels rejected by God and humanity, preferring to be alone and getting lost in nature. Nevill finds himself traveling from stronghold to stronghold searching for something that will fill his emptiness.

Settling The Difference Of Suffering

Robert Hugh Benson wrote many books which contrast the behavior, lives and beliefs of Protestants and Catholics. Initiation settles their differences on the topic of suffering. Protestants do not value suffering as Catholics do. Protestants believe it is meaningless and simply a result of the Fall of Adam while Catholics believe that it is for the better good and spiritual formation of man. Mr. Morpeth, a static character who bravely faces his own sorrows, shows that suffering is actually loving: “That is exactly what love means. You suffer because you love. If you did not love you would not suffer.”

“Greater Love Than This No Man Hath”

These are words that a faithful Catholic recalls when looking at a crucifix and the suffering of God. It is very fitting that a statue of the Pietà and events that surround this image serve as markers on a race course in Nevill’s conversion. In the first chapter Nevill looks on it with a revolting emotion and with annoyance because it was not in a church where it belongs. He announces that it is out of harmony and in a ridiculous place. “Fancy a Pietà on that lawn!” he says.

As the story progresses, and his conversion is initiated, Nevill describes his change of character by simply stating, “I don’t hate the Pietà any more. It must be there ...there's no getting away. So one may as well accept it.” He did not just mean the Pietà but suffering itself. He finally understands that love and suffering must walk hand-in-hand. Nevill believes that suffering should be set before oneself to remind man what love is. A life cannot be lived without hardships, suffering and pain. Nevill even erects a Pietà on his own front lawn to remind him that God Himself could not love without suffering for it.

Initiation was a well written, true to life story which shows the reader a conversion based on the use of suffering. The reader will come away with a new appreciation for the reasons that God sends hardships and a better understanding why Catholics are set apart from Protestants in the way that they love and suffer. It is from loving until it hurts that makes men, through the grace of God, become more Christ-like.