This These Happy Golden Years book summary demonstrates how Laura’s struggles earn her happiness in the end. 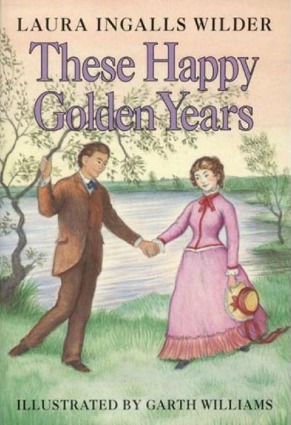 When she was a teacher twelve miles away from Ma and Pa, the housewife of the house she was boarding in did not like life.  Every week the man that Laura would one day marry, Almanzo would come to bring her home.

She liked this so much that her Friday afternoons were spent straining her ears to hear the sound that brought her so much joy: the sound of sleigh bells.

In this delightful novel by Laura Ingalls Wilder, there are many times when Laura faced discomfort and ridicule but it all resulted in happiness.

Laura suffered many hardships as a teacher. The woman who Laura was staying with, Mrs. Brewster was not a joyful person. She was mean to everybody. Every night when Laura came home, Mrs. Brewster taunted her. She said things about Laura that made Laura feel terrible.

When the first day of school came Laura went out of the house rejoicing that she did not need to stay in the house with Mrs. Brewster. Laura’s happiness came to an end on the first day as teacher. One of Laura’s students, Clarence, was a big nuisance. He seemed to know what would bother Laura most, and would not keep these ideas to himself. He just had to put his thoughts into action. This annoyed Laura to the point that she felt like it was only on her walks between the school and back that she truly was at peace.

Thankfully every Friday afternoon Almanzo Wilder would come to bring her home to Pa and Ma and away from Mrs. Brewster and Clarence. His company was more preferred to Laura than that of the Brewsters and Clarence. She was always glad when she heard the bells of Almanzo’s sleigh. She knew the pains it brought Almanzo to bring her home.

This made Laura appreciate his efforts even more.

Even though Laura went through tough times, she never gave up hope.

Laura appreciated Almanzo's efforts for her. She loved how without hesitation he came and brought her home every Friday. One time all her friends were having a day out sledding.

Almanzo immediately went to her house to invite her too. She was thrilled that he invited her out to sled.

In the summer months, when they could not sled, Almanzo took Laura out riding in his buggy. One time he brought Nellie Olsen along.  From the time she was young, Nellie Olsen had always pestered Laura. Nellie thought Laura was of a much lower level of dignity than herself. When Laura saw Nellie, she knew that this ride was not going to be very pleasant. Nellie pestered Laura the whole ride. Almanzo dropped Nellie off before Laura.

As Almanzo was helping her out she told him next time if he brought Nellie not to bother picking her up. Almanzo preferred to go with Laura, so the next day he did not pick up Nellie. Laura was glad Almanzo was so kind to her.

Since Laura had prepared so well, her wedding day turned out perfectly. After long months of slaving over it, her wedding dress was finally ready. Almanzo had taken her to the place of their wedding. The wedding was over quickly.

Laura was thankful for the gifts that she had received. She got a bit of lace from Ida, one of her childhood friends. She had gotten Fawn the heifer calf from Pa. She had helped raise Fawn, so it was only right that Laura should get her as a wedding present.

But the gift Laura cherished most was the little house that Almanzo had built. It was flawless. It was just the right size. It had all the rooms that Laura needed. Her wedding was probably so ideal because of how well prepared Laura was.

Laura’s Joys Were The Results Of All Her Hardships

Her teaching was a trial, but it gave her a reason to look forward to the end of the week. If she had been home all that time, then she would never have gone on one single ride with Almanzo.

Riding with Nellie Olsen was a trial, but if she had never gone on that ride then she would never have known how much more Almanzo cared for her compared to any other girl.

It takes trial to make something perfect. If something has never been tried, then how do people know it will work? Laura may have had many thorns in her side, but she bore them and was rewarded.

These Happy Golden Years book summary bottom line: This romantic climax to the Little House Series is a tale that will be enjoyed by young girls and maturing girls alike. Laura's struggles growing up and all the virtues that were instilled in her are displayed in the story of the women she becomes. Read it...it's great!

I hope you all enjoy reading it as much as I did.