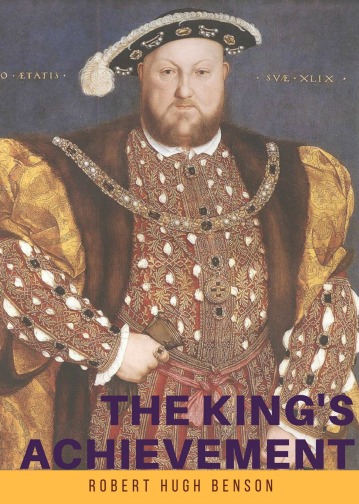 In The King's Achievement, by Msgr. Robert Hugh Benson, the reader is carried into the heart of the Protestant Revolt. The years of the story surround 1535 and beyond as the reader witnesses a rash king and a thriving Church under his power.

In this historical drama, the main characters are the Torridon brothers, Ralph and Chris. The reader also meets Beatrice Anterthon.

In this thrilling novel, the two brothers are set against each other as the elder, Ralph is in service under Henry VIII, and whose main job is to  persecute the religious communities.

Chris is a Benedictine priest whose vocation and life are affected by the "Visitations to the Monasteries." Beatrice finds herself entangled between the admiration she bears for Ralph and her strong love for the Church. The Protestant Revolt is just getting off the ground in England, with a King chasing one woman after another, and, at the same time, trying to get the Catholic Church under his thumb.

The Vivid Settings Of The King's Achievement

Overfield is rather an uncomfortable and cold house. Although his childhood home, Chris has no warm feelings for the place. "It was a piteous life that devout persons led at this time; and few were more unhappy than the household at Overfield." The "atmosphere was charged" with the unapproving eye of the mistress of the house. Always disagreeable, Lady Torridon tries her hardest to make the religious' stay as unwelcome as possible.

London, on the other hand is busy and colorful with many comings and goings of important persons. As Ralph works in London and has several lodgings there, he feels very superior to the family at Overfield. But it would please Ralph very mush to have Lewes Monastery to call "Home".

Lewes Priory is Chris' escape house. He feels like he can lock out the sinful world and cold Overfield behind one cloister door. But Chris soon learns that the world cannot stay out forever and even the wild life of London will sneak in.

The Believable Characters Of The King's Achievement

In this setting Robert Hugh Benson introduces Ralph Torridon, the secretary to the Chancellor of England, and his younger brother, Chris, who is a Benedictine priest at Lewes priory. Beatrice Anterthon, a close friend to the Thomas More household will feel the most sting from Ralph's actions.

Defiant, rude and spoiled, Ralph leaves his quiet family and home to become the secretary to the Chancellor of England, Thomas Cromwell. Ralph's worldly views give him a happy picture of riches and pleasures no matter what pain he will cause to others.

Ralph plays a main role in the Visitation to the Monasteries in which he strips churches of splendor as well as weakens the religions communities. In horror and suspense, the power hungry Ralph keeps the reader on the edge of their seat wondering what he will do next.

In the beginning of the story, Chris feels he has a vocation to the religious life. This younger brother is nothing like Ralph. Chris has a shy nature and is no foreigner to silence. Though very disappointed in Ralph, Chris feels he can only pray for his brother's soul. But Chris feels like Ralph might be a lost case as he realizes that Ralph is not afraid to drive Chris out of his monastery and force him to return home.

Beatrice Anterthon is a close friend of the Thomas More household. When she meets Ralph at the More home, she takes him as a friend and never suspects him as the spy he is. When Ralph proposes to her, she accepts. Beatrice believes that Ralph is in service to the King in order to make things turn for the better good. Ralph notices and encourages this idea. Beatrice is too much in love with him to notice his real aim.

It is not until the Torridon family tells her Ralph's plan that Beatrice realizes that she had been tricked and lied to. Will she be able to cast aside the man she loves in order to stand beside her principles?

Final Evaluation Of The King's Achievement

This story is a well written, true-to-life novel about the real outcome of the Protestant Revolt. Readers see in a story way the king's wicked ways and how he created chaos throughout the land.

The author keeps the reader on the edge of his seat especially in the final suspenseful chapters. This excellent novel shows that love can overcome pride no matter what may lay ahead.

The characters teach the reader that humility and poverty get rewarded in the end and that the greedy and the proud become miserable and unhappy.

The King's Achievement: So, What Was There To Reform???

This book gives a close look at the real outcome of the Protestant Revolt: far from a Reformation!

"Reform--the improvement or amendment of what is wrong, corrupt or unsatisfactory."

But the Reformation did not improve anything. The king's real achievement was a total break away from the so called "wrong", "corrupt", and apparently "unsatisfactory" never erring Catholic Church!

To make that point clear, Msgr. Robert Hugh Benson has given us this  masterpiece, setting in a story the real achievement of Henry VIII.

I hope you have enjoyed The King's Achievement book summary. I really enjoy the works of Robert Hugh Benson.

This story started a little slow but it picks up in the middle. By then it was hard to put down!

It also made some fun discussion with Teen-A that lasted almost until midnight! It was a great book and I will be reading this to my brothers and to myself again!