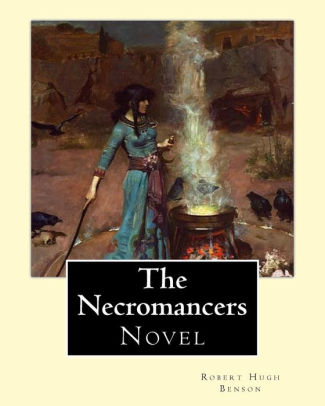 "I have read Benson before and knew him to be a trustworthy writer. It is a good book as the author stresses that you should be uncomfortable with such things."

I know, it's a weird title, and I don't blame you for seeing it once and shunning it. It just sounds bad: "The Necromancers"!

But its author, Msgr. Robert Hugh Benson, had good intentions. So to help you get to know the real meaning of this book, I present you with this book review.

In the horror novel, The Necromancers, by Robert Hugh Benson the reader understands the evilness and the consequences of those who play in this dangerous black magic.

Set in 1901, the reader is introduced to the two main characters, Laurie Baxter and Marguerite Deronnais. Laurie is intent on re-meeting his deceased love and starts to surround himself with a company from a new occult called the "Higher Thought" who will help him meet with the dead Amy. But his adopted sister, Maggie is worried about him. Will she be strong enough to help Laurie out of the mess he is making for himself?

Laurie was deeply in love with a fair girl and had a great plan for the future with her as his bride. All in one day his plans were hurled to the floor when he hears of the death of his sweet Amy.

He feels depressed and has it in his head that he will find some way of bringing her back to this world. He gets a little too interested in spiritualism and starts going to occult seances in hopes of seeing Amy though death separates them. Will Laurie know when he has gone too far or when to stop?

After the death of her parents, Maggie Deronnais left her convent school in France to live in England as Laurie's adopted sister. Maggie once says in the story, "I do want to be so absolutely ordinary all the rest of my life."

Maggie takes her Catholic Religion seriously and is a little worried about her brother. She feels like he is being very selfish and childish concerning the death of Amy and wishes he would just get over it. Then Laurie tells her what he has been attempting Maggie is disturbed. She begs him to stop and never go to another seance. Will Maggie be able to help Laurie when he doesn't realize that he has gone too far?

This excellent book stresses the importance of being on your guard against evil. It is filled with a horrible suspense as the reader wonders what will happen to the characters. Love and courage are the virtues that get everyone out of the mess one fool threw them into.

I hope you have enjoyed The Necromancers book review. I saw this book in The Robert Hugh Benson Essential and it perked my interest. I have read Benson before and knew him to be a trustworthy writer so I decided to read it.

I recommend this book to young adults as it is SCARY! I'm sixteen and I thought a couple times that I would be unable to go on! Horrible people, graves sinking and black magic...ew!

But it is a good book as the author shows that you should be uncomfortable with such things.