Through humbled and thoroughly loyal characters, Charles Dickens shines light on the fact that social class has nothing to do with character formation and happiness in his classical novel. 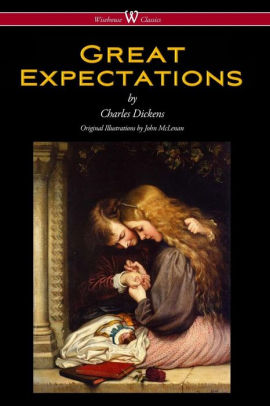 This is a very depressing thought for the seven-year-old orphaned blacksmith apprentice, but he is determined to one day get away and find happiness.

It is only through his healthy sense of guilt that Pip is humbled. He discovers that despite his idealistic dreams of the higher class, he appreciates the lower people with whom he belongs.

Pip lives with his sour and ill-tempered older sister and her polar opposite husband, Joe, the blacksmith. They live poorly and Pip does not look down upon his way of life until he meets the wealthy Miss Havisham and Estella. They, especially Estella, insult Pip on account of his lowliness. It is then that Pip becomes ashamed of himself and begins to believe that only the rich are happy.

As Pip grows up, he is given means to fulfill his desires to become a gentlemen. He is not told who his benefactor is but he feels that Miss Havisham has taken pity on him and lavishes money on him.

Dickens shows that the social class is a farce and has no influence on people’s characters, but Pip is oblivious to the fact.

As he is away from his now despised small town and people he loves, he does not understand why he is still unhappy. It is at this point in the story that Charles Dickens intentionally develops Pip into a snobbish, wealthy gentleman.

Pip meets many people when he moves into elite social circles and the reader plainly sees that the lower, working class people are the loyal, affectionate, and sensible friends. The first and greatest example of this is Pip’s brother-in-law, Joe.

Joe has a simple personality but is soft-hearted and is a fountain of solid wisdom. When he visits Pip in London, Pip’s manner toward him is contemptuous. Even after this treatment, Joe is still a constant friend and is always there for Pip.

Hubert Pocket is another example of admirable traits in the middle class. Not as wealthy as Pip, Hubert is in debt and searching for a job through most of the story. He is Pip’s closest friend and is the pillar of loyalty and common sense.

Dickens makes Hubert the person in Pip’s life who is there for his betterment. Pip secretly secures Hubert a job resulting in the only good thing that Pip does since coming to his great expectations.

The last example of the admirable lower class attributes is the lawyer’s secretary, Mr. Wemmick. Wemmick has two personalities which is delightful to the reader. Pip describes him as two twins who, depending on the surrounding, is “the right one”.

Wemmick’s home personality is friendly and comfortable as well as a native wit when Pip asks his advise. Wemmick’s other personality is a businessman who is clerky, abrupt and does not treat anyone personally. Mr. Wemmick’s twin personality makes him the perfect example of a life in the world but not of it.

Through Joe, Hubert and Wemmick, Pip realizes that the low and middle classes live more virtuous and satisfactory lives than the upper class.

In the novel, Dickens presents guilt as a good and healthy emotion. Pip’s pride is smashed to the ground when he learns that his benefactor is of a lower class status than himself who has sacrificed and worked for Pip to have the life he wants. Pip is filled with guilt and wishes that he never fell into his great expectations.

Pip sees what a fool he was and how ungrateful he has been. Through his guilt, Pip becomes a better person and decides that he no longer wants to be a gentleman.

Pip returns home convinced that social class is merely display and cannot influence a person’s characters for the better. He plainly sees that poor people not only possess great virtues but that they are much happier.

Learning through his guilt, Pip discovers that true happiness is being surrounded by family and Christian values. Although the segregation between the snobby high class and the virtuous lower class is exaggerated to make a point, the reader still comes away with satisfaction in their current position, and a greater appreciation for virtues as well as their family and friends from reading Great Expectations.

I will say that I enjoyed Great Expectations. I laughed at a few of the humorous descriptions and shared them with others.

But I do not think I will read it over and over again. It was a good story with a heartwarming message of  "where you want to be is exactly were you have always been". It was also a weird story considering the super creepy, decaying lady living in an equally decaying wedding dress.

That said, I will add that I am not a Charles Dickens fan so we will see if Teen-A likes it when she reads it!