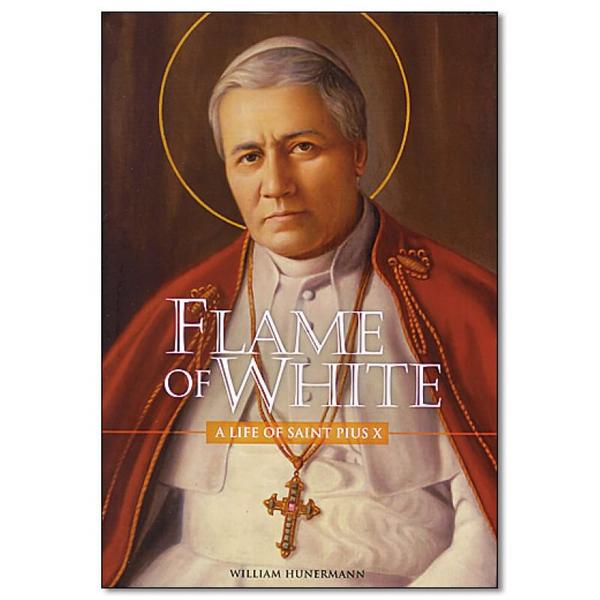 The book Flame of White is a very great book about St. Pius X. It was written by William Hunermann, and published by Lepanto Press. Its copyright date is 2007.

Flame of White takes place in Italy, during the 19th and 20th century.  This book is a biography about friendship and self sacrifice.

The main character is Beppo or Pope Pius X who is kind and humble. The story follows Beppo as he transfers from parish to parish, then diocese to diocese, and at last becomes the pope.

Flame of White is interesting and full of meaningful events in the life of Pope St. Pius X.

Beppo was very good in school. He always got excellent grades. The only time he got in trouble was because he defended Pope Pius IX.

He was good to defend the pope. It showed he was a good and strong Catholic. Even when the priests were not saying nice things about the pope he was brave enough to stand up for the pope whereas other boys only secretly agreed with Beppo.

“‘That must not happen.’ said the Cardinal passionately and his hand clenched furiously. ‘Venice shall not show such insult to the pope. By September there will be no more Freemasons in office. The people will sweep these men out of the state house.’”

He really cared about who was running political affairs and he was not going to let a bad government rule the town he was cardinal over.

He not only thought that he was unworthy of  becoming a pope but before, not worthy of becoming a bishop. “When Monsignor Sarto had glanced over the first line, he grew deathly pale and began to tremble, ‘No not that,’ he murmured. His lips quivering. ‘Not that.’” This event shows how meek and humble he was all through his life.

Pope Pius X biggest challenge and goal while he was pope was to stop the world war from coming. On his deathbed he knew that despite all his efforts there was no way he could stop it, and that soon after his death all nations would be divided against one another and there would be much bloodshed. He did not want people to be dying and he tried his best to stop it.

Flame of  White was well written because it was easy to follow and to understand. I liked this book because it is a very wonderful and good story.

Flame of  White is true to life because it is about a saint. This book is excellent. It taught me not to be selfish, to be kind and that not having everything is alright.

Every person should read this book; it will change your life.