The historical adventure fiction, The Winged Watchman, by Hilda van Stockum, published by Bethlehem books, is about a family’s struggle during the Nazi occupation in Holland during World War II.

The main character, Joris, was six years old when the Germans invaded Holland. The story follows the bravery and courage of his family during this hard time. Joris and his older brother, Dirk Jan, encounter dangerous message deliveries, English weapon droppings in the middle of the night, and get to personally help an aviator escape the country. 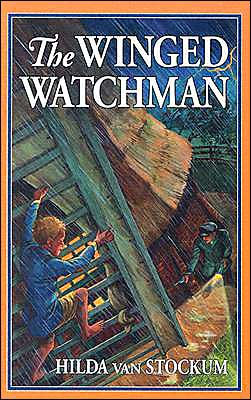 Joris' Bravery: Escape of the Aviator

The main character, a ten-year-old boy named Joris, is brave and does what he can to help others. He may be young but he is very interested in the war and wants to help anyone he can.

When he and Dirk Jan discover an English refugee hiding in an old mill, they know that he is from the ally forces and must find a secret escape if he is to make it out of Holland alive.

Joris’ greatest act of heroism is helping the English Charles escape. Although it is risky for his entire family, Joris and the rest of his family sacrifice what they have to help Charles escape.

Dirk Jan is Joris’ older brother. He is daring too. Dirk Jan is commissioned with the task of delivering a message for his uncle to The Underground. He is chosen because his uncle knows that his youth will make it so that the Germans are, "less likely to shoot him". If he is caught by the Germans, he will be sent to a Nazi concentration camp. He knows this well and bravely and successfully delivers the instructions on where a weapon dropping is to take place.

Uncle Cor: The Sacrifice of a Hero

Uncle Cor is the two boys’ uncle. An exciting and always jolly character, he is secretly an Underground hero. He organizes weapon droppings and helps people escape to allied countries. Pulling off disguises from SS soldier to St. Nicholas, Uncle Cor is constantly helping refugees and smuggling prisoners out of Holland.

In this trying period of history, Joris proves his bravery and generosity by helping Charles escape to England. Dirk Jan manifests his daring and wit as he delivers a message right under the German’s nose. Uncle Cor is the symbol of patriotism and sacrifice as he offers all his talent to helping his fellow suffering men. In the end of the story the boys get the experience of a lifetime as they help in The Underground and assist people who need them.