What Are Martyrs Of The Roman Persecutions? Watch The Story Of Saints Cyprian And Justina's Martyrdom Here.

What are martyrs well-known from the Roman persecutions? Although they are almost uncountable as the persecution raged on and off over the course of the first three centuries after Christ, there are some who are very notable for their valor and courage during times that were difficult for the Church. Six notable martyrs are Sts. Cyprian and Justina (whom we actually made a short film on!), St. Laurence, St. Sebastian, St. Pancratius, and St. Agnes.

Saint Cyprian Of Antioch, The Sorcerer Turned Martyr, And The Woman Who Converted Him Were Executed Together

If the errors and disorders of St. Cyprian show the degeneracy of human nature corrupted by sin and enslaved to vice, his conversion displays the power of grace and virtue to repair it. Let us beg of God to send us grace to resist temptation, and to do His holy will in all things.

-Reflection on St. Cyprian from the Little Pictorial Lives of the Saints

When Cyprian was born, his unholy parents consecrated him to the devil. He grew up worshiping and serving Satan and using the infernal powers to preform spells to meet his own ends.

The story goes that Saint Cyprian was hired by a Roman noble named Agladius to cast a spell on a particular woman to fall in love with him. This woman was Justina, a Christian woman who had no intention of falling in love with and marrying a pagan.

Cyprian tried all his powers to get her to fall, but she armed herself with prayer and mortification and all his efforts came to naught. Feeling the superior powers of God over the devil, Cyprian himself became a Christian alongside Agladius.

During the persecution that followed under Diocletian, Cyprian and Justina were presented to the same judge and were executed together. Even though Cyprian was an evil man, God gave him the grace to die for love of Him. But, just as the above quote says, what are martyrs for but to show us that no one is too weak or too evil to turn to the love of God?

The Martyrdoms of Sts. Justina and Cyprian will be available Spring 2023.

Do You Want To See Other Films Like The Martyrdoms of Sts. Justina And Cyprian Soon?

All of our films are free to watch but are not free to make. We ask our viewers to help us make films like this one by paying-it-forward. If everyone who reads this page this month were to donate just $3, we would make $300 on this page alone. If this short entertained you and your family, or if you just found it interesting, please take one minute to show your appreciation. Thank you and God reward you!

When Asking What Are Martyrs From The Roman Persecutions, Remember St. Laurence: The Saint Who Presented The Poor As God's Treasures And Was Grilled For His Kindness 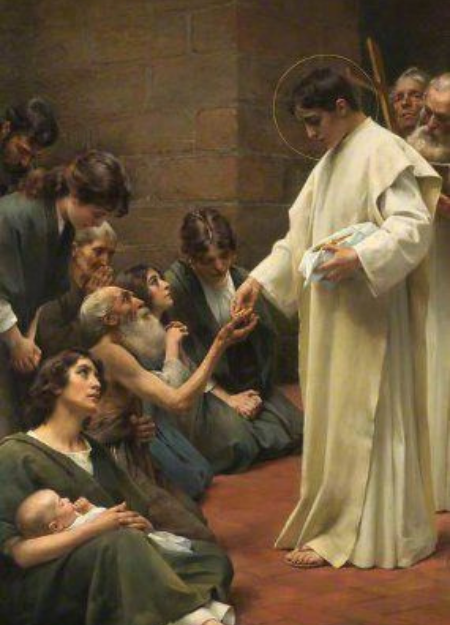 St. Laurence was one of the seven deacons on the Roman Church in the middle of the 3rd century. It is said that when Pope Sixtus was led to his death that St. Laurence followed him, weeping because he could not join his pontiff. Pope Sixtus told him not to weep because in three days he would also suffer for Christ.

After his capture three days later by the Roman prefect, St. Laurence was asked to hand over the riches of the Church. He agreed to do so if he were allowed to go and get them. At his return, the emperor was enraged that St. Laurence brought a crowd of beggars from the streets of Rome.

When St. Laurence was asked what he meant by bringing such lowly persons into the palace, he responded, "See the treasures of the Church." The audacity of this saint was met with cruelty from his emperor. His death was to be a slow roasting on a grill.

St. Laurence replied with great bravery. When lying on his face on the grill, he joked with his executioners saying, "You can flip me over now, I am done enough on this side."

"Our Lord appears before us in the persons of the poor. Charity to them is a great sign of predestination. It is almost impossible, the holy Fathers assure us, for any one who is charitable to the poor for Christ's sake to perish."

-Reflection on St. Laurence from the Little Pictorial Lives of the Saints

Patron Saint Of Atheletes Whose Emperor Turned From Favoring Him To Instant Hate When He Was Discovered To Be A Christian: St. Sebastian 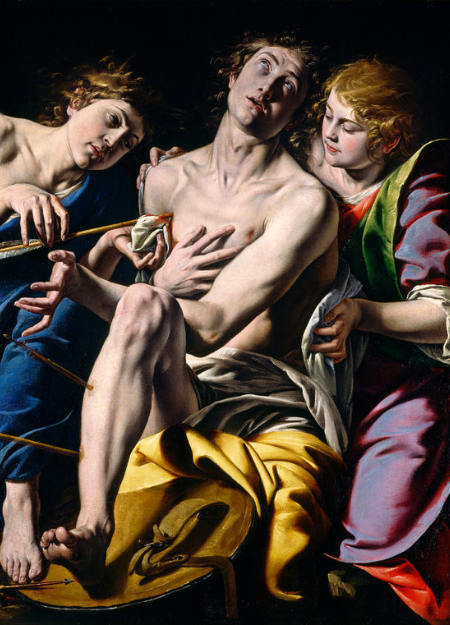 Saint Sebastian was a soldier well-liked by both his fellow soldiers and Emperor Maximian Herculeus. When the emperor discovered that he was a Christian, his revenge was ferocious. He ordered that Sebastian be shot with arrows many times without a vital shot so that his death would be slow and painful.

What is usually left out of the story is that that is not the way he died. He was indeed shot, but the emperor's own command made saving his life a possibility. A holy widow named St. Irene and her daughters nursed his wounds until Sebastian was again able to defy the emperor's laws and was this time cudgeled to death to prevent his recovering a second time. Thus he received a double crown of martyrdom.

His story, as well as that of St. Pancratius and St. Agnes, is well recounted in Cardinal Wiseman's novel Fabiola.