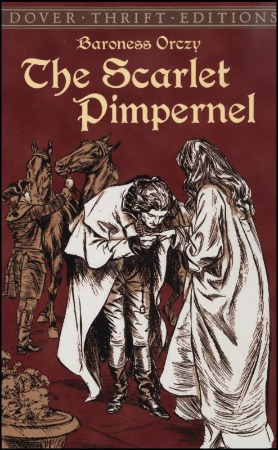 "This story is a well written, true-to-life novel about love and is filled with suspense."

The Scarlet Pimpernel, by Baroness Emmuka Orczy takes the reader to revolutionary France in 1792 where people thirst for their fellow countrymen’s blood.

This 211 page historical drama, published by Dover, copyright in 2002, also takes place in England where Sir Percy and Marguerite Blakeney live. Other characters include the heroic Scarlet Pimpernel and his evil nemesis, Chauvelin.

In this thrilling novel, no matter how many traps he sets for the cunning Scarlet Pimpernel, Chauvelin always comes up empty handed.

The Reign of Terror is just getting off the ground in France, with mobs swarming around the bloody guillotine. Royalists are stripped of their dignities and thrown into dirty prisons to await their deaths. While in England the wealthy people enjoy high society with balls and operas. The reader also gets a glimpse of the lower class lives in fisherman villages and inns on both coasts of England and France.

In this setting Baroness Orczy introduces Marguerite, her foppish husband Sir Percy, the accredited agent of France, Chauvelin; and the elusive and wily Scarlet Pimpernel.

Marguerite is a young French actress who marries a rich Englishman, Sir Percy Blakeney. Not only is she the most beautiful lady in England as well as France, but she is also the smartest lady in Europe. With her clever mind she is a deep thinker, planning everything out before her.

Although it seems that she lives quite happily, Marguerite Blakeney realizes that Sir Percy has ceased loving her and has pushed her out of his life. Marguerite finds herself admiring the unknown Scarlet Pimpernel for his bravery and self-sacrifice.

Sir Percy Blakeney is rich and foolish. Cowardly and stupid, he enjoys nothing better than midnight rides and fancy clothes. Although it seems he would not care, Percy does not trust his wife, Marguerite. He has decided to shut her out of his life as well as his heart.

Chauvelin is a sly Frenchmen and an old friend of Marguerite. Chauvelin is faced with the task of finding the Pimpernel before he finds himself at the threshold of the guillotine. He will do anything to be the one to send the elusive Pimpernel to the guillotine, filling his own pockets with money.

The Pimpernel is cunning, smart, and elusive. He dedicates his time to help the unfortunate aristocrats escape unjust death at the guillotine. He craftily disguises himself, sneaks into Paris, stuns guards and the people of France, and brings the Royalists back to England, where he is just as unknown as in France.

Smuggled royalists are not the only thing he needs to keep out of danger, the nineteen young Englishmen in his league are also his responsibility.

A Hero, An Ultimatum, A Penitent

The Pimpernel is a fear to the French people and a worry to the Paris gate guards. Chauvelin is desperate not to let one more aristocrat escape.

He asks Marguerite if she will help him find the Pimpernel or have her brother go to the guillotine. Marguerite is helpless against to his ultimatum.

Later, when Marguerite does discover the identity of the Scarlet Pimpernel she quickly runs to France and tries to find the hero and tell him that Chauvelin is on his track.

This story is a well written, true-to-life novel about love and is filled with suspense. Marguerite and Sir Percy overcome their pride, gain one another's trust, and live truly happy in England.

The author keeps the reader on the edge of their seat especially in the final suspenseful chapters. This excellent novel shows that love can overcome pride no matter what may lay ahead.

Baroness Orczy’s characters teach the reader loyalty, self-denial and bravery. In the end, Marguerite was loyal to the Pimpernel by putting her life in danger to warn him. The Scarlet Pimpernel’s extraordinary self-denial as he bravely faces many dangers for the sake of others inspires the reader.

Loyalty, self-denial and bravery linger in the reader’s mind and help inspire him to develop these virtues in his own life.

I couldn't put this book down. It was a great suspenseful drama weaved with an intriguing mystery weaved in. This is a timeless tale that will be enjoyed by all ages.