Saint Catherine Laboure And Our Lady's Miraculous Gift To The World

Saint Catherine Laboure is a saint well-known for the special gift given to her by the Blessed Virgin Mary: the Miraculous Medal. Called Miraculous for the many miracles that have been wrought by this simple medal, devotion to this medal is a well-loved Catholic devotion. Below you will find a short video of this apparition.

O Mary, Conceived Without Sin, Pray For Us Who Have Recourse To Thee.

One night, when Sister Catherine was asleep in her cell, her angel appeared to her and commanded her to come with him. He led her to the chapel where she saw the Mother of God seated with angels on either side of her. Mary told Sister Catherine that she had a mission to give to her.

Mary, with many shining rays coming from her hands, was surrounded by the words "O Mary conceived without sin, pray for us who have recourse to thee." The vision revolved and then Sister Catherine saw an image of the letter "M" with the cross coming out of it. In the two bottom corners were smaller images of the Sacred and Immaculate Hearts. It was surrounded by twelve stars.

For the sake of brevity with our movie, we combined the two apparitions to be on the same night and a medal be handed to Sister Catherine.

Besides Mary's spiritual message, she also foretold the coming of the WWI, saying that the people of the earth would have much to suffer.

Saint Catherine Laboure And The Message Of The Miraculous Medal 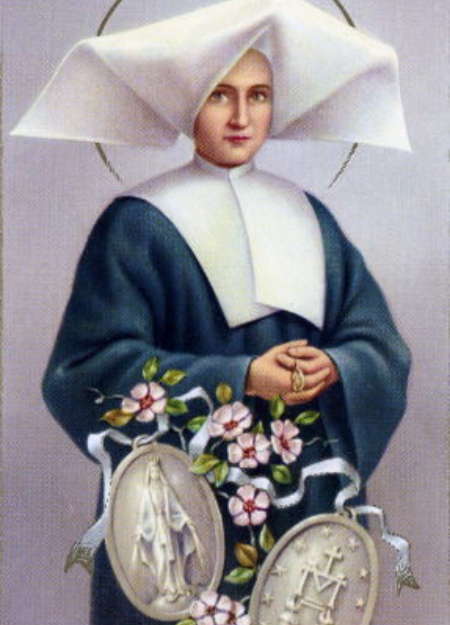 Saint Catherine Laboure lived in 19th century France. She was a nun belonging to the Daughters of Charity Order, an order well-known for their starched white coronets.

Looking at the medal, we can find much symbolism in the symbols used. First of all, Mary, our mother, with her hands outstretched to her children shows us the loving and maternal heart that Mary possesses and the eagerness of her arms to gather her children to her breast.

On the reverse side of the medal, the "M" of course stands for Mary. The cross that comes out of the top shows that Mary faithfully stood at the foot of the cross and is the co-Redemptrix.

On this subject, I once heard a priest talking about how the most painful thing that a woman can suffer is the torment of her child. The tactic of breaking a woman with this method was tried and failed on the unnamed mother of the Maccabees who watched as one by one her sons were killed for refusing to give up his faith. In a very similar way, Mary was tormented by watching the suffering of her Son. The priest ended his sermon by saying that although "Better love hath no man than he lay down his life for his sheep," a similar saying may be: "Better love hath no woman than she give her Son for her children".

Finally, the twelve stars that border the back of the medal symbolizes the twelve Apostles, who, although not at the foot of the Cross, surround and stay close to Jesus and Mary symbolized by the Sacred and Immaculate Hearts.

In 2016, I was able to go see Saint Catherine Laboure's body. The chair that Mary appeared in is preserved in the sanctuary, unmoved from its original post.

St. Catherine's body is in a side altar beneath the heart of St. Vincent de Paul, which is kept there when not on pilgrimage. Unfortunately, when I was there the heart was on pilgrimage in the US.

Did You Enjoy This Short Movie? Did You Find It Helpful Or Interesting?

These films are free to watch but are not free to make. We ask our viewers to help us make films like this by paying-it-forward. If everyone who reads this page this month were to donate just $3, we would make $300 on this page alone. If this short entertained you and your family, or if you just found it interesting, please take one minute to show your appreciation. Thank you and may God reward you!