Short St. Teresa of Avila Movie Tells The Story Of Her Young Attempt To Get Herself Martyred

St. Teresa of Avila is a saint well-beloved for her in-depth mystical knowledge. Those who knew her tell us that she was an uplifting and unforgettable character, holy but far from a boring person to be around. We have paid our respects to this great saint with our short film of an episode from her early childhood.

We read that she was "wilder than all her brothers put together"...Even as a youngster, she was vibrantly vital; she did what she did with a reckless abandon...It was with her "all-or-nothing" disposition. Teresa of Avila did not operate by fractions.

The above quote from Fire Within by Thomas Dubay S. M., seems to fit right along with the focus of our film. A cute well-known story that you will find in most stories about St. Teresa of Avila tells that this saint, at a very young age, yearned to be martyred. Her longing was so strong that she actually convinced one of her brothers that they should go to Africa with the express purpose of seeking martyrdom.

This short film recounts her ardor and fortunate failure when her mother discovers her plan. This cast, completely constructed of young children, brings this little anecdote from her childhood to life. We made this film while we were in the middle of making Outlaws of Ravenhurst and really made an exercise of using the green screen out of this short.

The Lessons Of This World And The Next Handed Down To Us By The Great Mystic St. Teresa of Avila 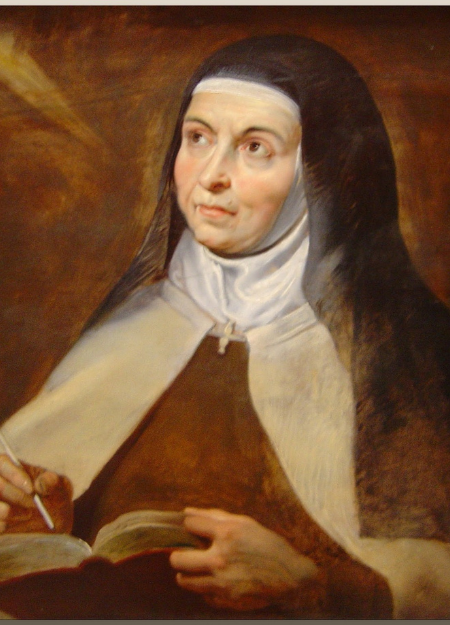 St. Teresa of Avila, though she was a mystic, proved that there are many natural virtues that go hand in hand with the supernatural ones. These virtues must only be refined by divine love to make them completely pleasing to God. Fire Within tells us foremost that St. Teresa had a great sense of humor, a virtue much needed to carry out God's Will cheerfully.

St. Teresa is also said to have had a strong will, as is depicted in the movie above, and a way of getting exactly what she needed without offending or cheating those she dealt with. Thomas Dubay says that she, "was a born leader who had no problem in disagreeing with men, in giving spiritual direction (when sought of her) to a bishop, in negotiating with officialism, secular and religious. Even though she considered women as given to an excess of emotion and imagination,...she assumes that they are often superior to men in judgement."

These were not thoughts that were circulated in the 16th century and are obviously derived from St. Teresa's original way of seeing things without fearing what others might think.

Another great virtue that St. Teresa possessed, made even greater in respect to her naturally strong will, was her perfect practice of obedience, even to those under her care in the convent. She is said to have even obeyed the seemingly silly requests given to her. It is said when those who requested such things recognized how insensible their requests were and asked her why she still obeyed, Teresa is said to have answered, "It is less important to make a mistake of that sort than to fail to obey for love of God so long as it is not against His will."

So great was her love of obedience, that she would submit even what Christ Himself had commanded to her confessor. If he told her to wait, she would obey. This method was approved by Christ Himself.

Her great confidence of character surely comes from St. Teresa's deep knowledge and interaction with God in her mystical experiences. When a person reads her writings, it is as though the love she felt for God, written so long ago, comes forth and enkindles the same fire of love that St. Teresa felt for her Lord. How fading our love for Christ may feel compared to Teresa's intense desire to possess Him alone!

St. Teresa of Avila was also called by Christ to reform the Carmelite Order and spent much of her time at various convents. Through all that kept her busy, she still found time to write at the order of her superiors so that we could learn what we can about her deep life of prayer in her book The Interior Castle. St. Teresa of Avila's feast is celebrated on October 15th.

"After all I die a child of the Church." These were the Saint's last words. They teach us the lessons of her life - to trust in humble, childlike obedience to our spiritual guides as the surest means of salvation.

-The Little Pictorial Lives of the Saints on St. Teresa of Avila

Hearing The Legacy Of St. Teresa Echo All These Centuries Later 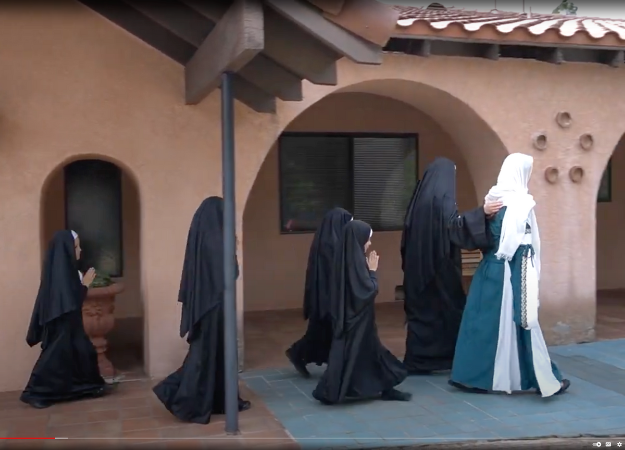 When we were filming Grisly Grisell, we had the great pleasure of visiting the discalced Carmelite convent in Georgetown, California, as a shot location. We were struck by how much the convent, in its structure and silence from the world, was reminiscent of old Spain. The convent looked as though St. Teresa had just built it in her home country and was reforming the order there.

A legacy that echoes across nations and down the ages like that is one worth upholding and remembering for all time. St. Teresa, pray for us!

Did You Enjoy This Short Film? Did You Find It Helpful Or Interesting?

These films are free to watch but are not free to make. We ask our viewers to help us make films like this by paying-it-forward. If everyone who reads this page this month were to donate just $3, we would make $300 on this page alone. If this short entertained you and your family, or if you just found it interesting, please take one minute to show your appreciation. Thank you and God reward you!