Outdoor family fun is the best kind of fun!

Get outdoors and have a good time with the whole family. Kids love playing outside. Being outdoors is good for both body and spirit.

All members of the family are sure to benefit. Physical benefits include:

St. Paul said: “May the God of peace Himself sanctify you in all things; And your whole spirit, soul and body, may be kept preserved blameless in the coming of Our Lord Jesus Christ”
-1Thess 5:23

This game kept us entertained for hours! We would play this cutthroat style with a champion square on one side of the court. If this person could keep the square through the entire game, he was called the Foursquare King until he was usurped by a better player. The best player could be King for an entire summer if no one ever improved in this game.

We would play handball or "2-square" because there was not enough cement space for foursquare but the same rules applied. The Foursquare King would take the champion box and the opponent would take the opposite. If the King got the other player out, a new player would take the looser square and try to oust the King. Several kids could play this way even though it was technically a two person game. 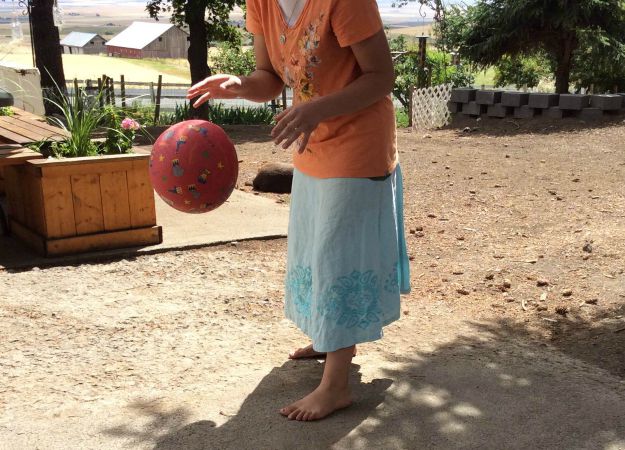 The court needs to be concrete and consist of two sides. Using sidewalk chalk, draw a line dividing the court. Choose one side to be the champion box. This is the serving side and the winner or King always serves. The server is the only one who can score points when the opponent doesn’t return the ball. If only two people are playing, switch servers when the ball is not returned by server, or a new person takes the looser box and the King serves again.

The best kind of ball for this game is a rubber playground ball. If you are desperate, a volleyball world too. We've played with basket balls too, but they are much harder to play with.

The ball is always bounced once then slapped into the opponent's court. To serve, drop the ball then slap into other court. Return ball after one bounce. Server scores when the ball is not returned or goes out of bounds. Some rules that we followed are:

If the ball did not bake it into the other court and touched the line we called that out too. You can keep a score for this game if there is only two-people playing but we hardly ever did. You can set the score to 5, 10, or 15. The first one to reach the score agreed upon wins. Winner is first server in next game and it is a new challenger's turn.

Like I said, we played this all summer, every summer.

Now, here is a fantastic outdoor family fun activity! I have been to parties where something like 30 kids play this game! When there’s a big group of children, dodgeball is the ideal game to play. We spent many afternoons playing this game but it was better when there were closer to 10-15 kids playing. With very few team members, the game does not last very long but you could always re-chose teams and play again. 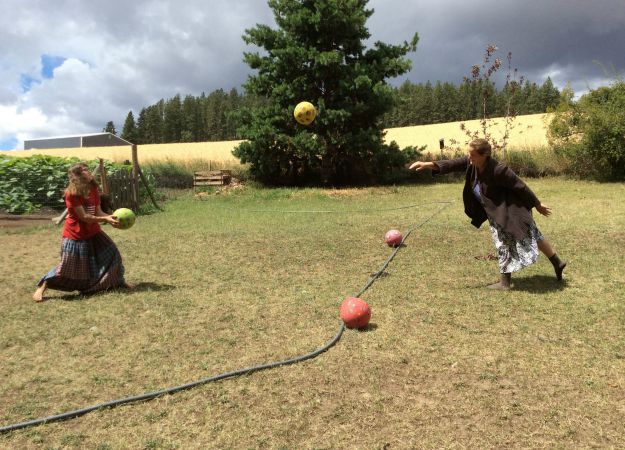 Dodgeball is a team game consisting of two teams. Each team should have 8-12 players. Use about 25 feet of rope to set boundaries. (we used a watering hose.) Make sure that the teams are aware of that the edge of the court is also.

Two team captains take turns picking teams. We liked to play with a weasel. Each team captain chooses a “weasel” for the team. This is usually a small, quick player. This persons' skill is the deciding factor of winning the game. The Weasels meet each other at the line and shake hands. The goal of each team is to get the other team's Weasel out.

The teams line up at the back of the court then out down. Our Ditty was "1-2-3-4 Dodgeball War!!" All players race to the center line then balls start flying! Anyone who gets hit with a ball must sit down on the floor. The weasel's job is to tag his fellow teammate and not get hit. If the waste succeeds in getting another player back in the game, that person stands up and continues to play. If a weasel gets hit, that team is practically doomed.

We have incorporated that if a player catches a ball, the opponent who threw it must sit down. This adds an interesting twist as some players are not good at catching and practically sacrifice themselves to the throws of the enemy.

The team to have the last player standing wins. The game ends when an entire team is sitting, so protect your “weasel.”

Another way to play this game is with the two color ball method. When playing this way there is no "weasel". Here's the twist. When someone catches the single colored ball, their whole team gets to stand up and get back in the play. 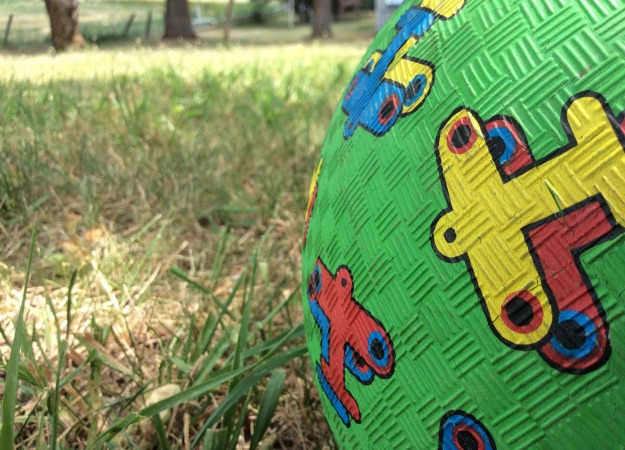 Kickball is were baseball and soccer meet.

Like baseball, there are 2 teams, 4 bases, and a pitcher. Like soccer, the "batter" kicks the ball into the outfield and runs for the first base before someone can tag him with his ball.

This is a great sport as it takes next to little talent and you don't have to go through the embarrassment involved when you can't hit a 3 inch hard ball with an equally wide stick. 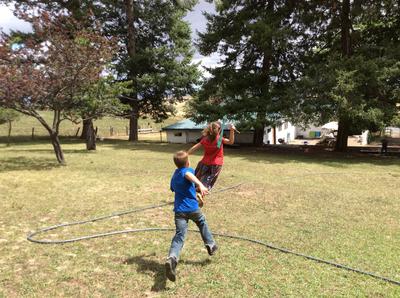 Capture the flag is a favorite in our house. Like dodgeball, it is best to play with over 15 players. You will need a large area to play, two objects to use as a flag (balls, sticks with a piece of fabric tied to one end, Frisbees, etc.), a piece of rope about 50 feet long (or the hose), and a group of friends to play with.

Separate the players into two teams. You can pick team captains or have one person separate all the players. Put your rope halfway down the playing area. Pick which team goes to which side of the rope, this is their territory. Each team hides their flag on their territory. When both flags are hidden, the place of each team's jail is chosen.

Elect a jail guard to ensure their are no escaped prisoners. Then elect a flag guard to protect the flag from being captured. The jail and flag guard may be the same person.

Chose a person who is not playing (like a parent) to call jail break every 15 minutes or so. After the guards are picked, the game begins!

The objective is to run into the other territory and retrieve the flag without being caught and sent to jail!


To Win: Get the enemy's flag on your territory first! Your team wins!

Other outdoor family fun activities which are not necessarily games but provide hours of family time outside are:

For outdoor family fun that is going to take a little more time investment consider gardening with your children, bird watching with them, or setting up a back yard swimming pool.

Bird watching is very entertaining as is taking care of animals. Some animals we have here at the Industrious Family Farm include:

With these activities, you will have to shell out some cash, but if this is done sparingly as your children and grandchildren are growing up, the memories made will be priceless.