The Ballad of the White Horse Book Summary 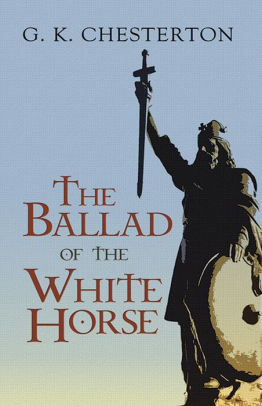 In the poem, The Ballad of the White Horse, G. K. Chesterton takes great care to convey the difference in attitudes between the Christians and the pagans. Those who worship the servant-God are filled with faith, hope and joy whereas those who worship the bloodthirsty gods exude a spirit of pure hate. Logic and reason stack up against superstition as the views between life and death collide on the battlefield.

King Alfred of England and Guthrum, king of the Danes illustrate how the way one worships affect one’s outlook, especially one’s views on death. Alfred’s greatest hope is to have a Christian burial and to be remembered and prayed for.

Alfred sees God “like a good giant, that laboring, lifts the world." Guthrum fights to evade death which is empty to him. His gods, “cried for blood like beasts at night, sadly, from hill to hill.” The differences between Christians and heathens is obvious when comparing their views on life and death.

Faith, Hope And Joy Vs. Hate

As the English Christians lie defeated on the floor, the Danes tread upon them. Yet it is the Christians who have joy in the goodness of the world and hope in God’s aid while the latter are broken-hearted and filled with despair. Alfred encourages his allies to “have joy without a cause and faith without a hope”. The pagans, on the other hand, sing of a ruling spirit behind the gods, namely pure hate. Standing beside the campfire, the Danes declare, “Fury, that does not fail...And hate alone is true.” The Christian’s spirit of faith, hope and joy rival the heathen’s spirit of hate.

The Christian’s faith is rooted in logic and trust in God’s aid. On the contrary, the pagans root their beliefs and their guarantee for success in superstition. The pagans believe all good things are tainted by a lack of guarantee and weakness. “There is always a forgotten thing, and love is not secure.” Mark, one of Alfred’s allies, bravely approaches a Dane with a magical spear and defeats his foe. The Christians trust in God to help them: “God hath broken the evil spear!” The Christian faith is firmly rooted in logic whereas the unbelievers are ruled by superstition.

Christian civilization is governed by faith and reason. Heathen nihilism is controlled by the ruling spirit of hate and superstition. The differences between Christians and heathens is obvious when comparing their views on life and death. Christian civilization battles heathen lawlessness in Chesterton's epic poem, The Ballad of the White Horse.

I hope you have enjoyed The Ballad of the White Horse book summary. I read this poem the first time and did not understand it AT ALL. A few months later I reread it and the second time everything made sense and I could hardly put the book down!

I recommend reading the poem twice and researching a little about the white chalk horses which sprinkle the rolling hills of England. I had no clue what this was the first time reading.

The rhymes are witty and entertaining and at other times are sweet and serious. I look forward to sharing this poem with the rest of the family. It will be so fun because I can help them understand it!