An action packed and unique highland games party is easy to throw with this guide. Celebrate a birthday, a holiday, or throw one just for fun.

Get the party rolling with...

Highland Games Party Food, Feeling, And Fun To Make Your Party As Easy As Pie 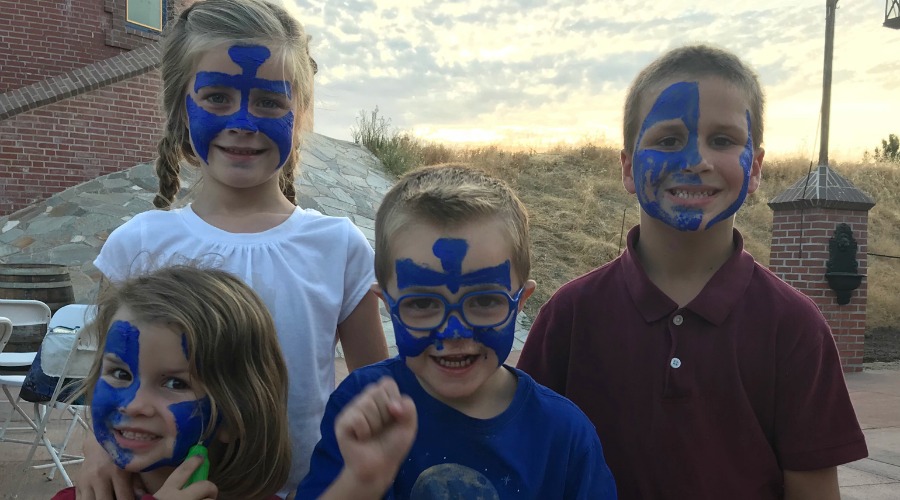 As guests arrive, get the Celtic spirit going with Braveheart face painting. Your guests are going to feel like "warrior poets" and true "Scotsmen", plus they will add to the feel of the party becoming a part of the theme.

Another key part of your planning should be the decorations. Your main decorating colors should be blue and white. The colors of the Scottish flag!! Buy some:

A plaid table cloth and a shamrock oxalis center piece would look great.

To Understand The Menu Options, You Must First Watch This Veggietales Silly Song

Irish Fare, Scottish Fare, And American Fare Will Satisfy All Pallets And Makes For An Easy Yet Exotic Menu 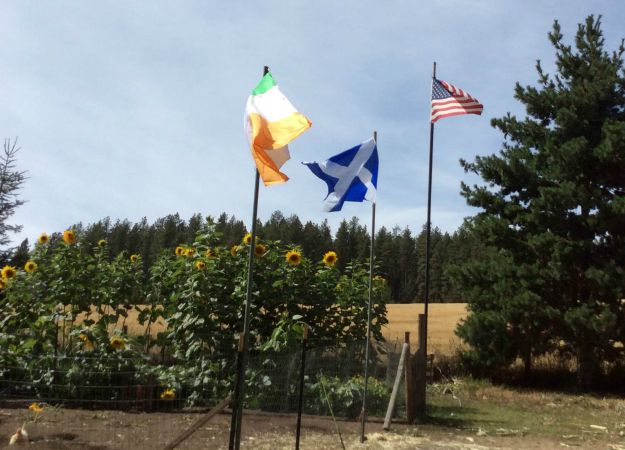 Apple pie is a great American dessert option or if it's a birthday party, opt for a cake decorated as an American flag.

Haggis can be bought in a can, heated and served with crackers. If you don't have time to make crumpets, a pancake-like bread, buy some English muffins and serve with jam.

This is a fast paced party so it is probably best to have the cheeseburgers ready before the party and kept warm or warmed up in the oven. Keep them simple and only provide ketchup and mustard.

These food choices were inspired by one of our favorite Veggietales SillySong! American fare you may wonder?

Did you know that Americans from Celtic descent are one of the largest ethnic groups in America? This makes the USA a "Celtic" nation for the purpose of this party. Not living in the US? Well, cheeseburgers and apple pie are delicious. This is a great menu. Trust us.

Plan Ahead For Seamless Entertainment With An Itinerary & Invitations 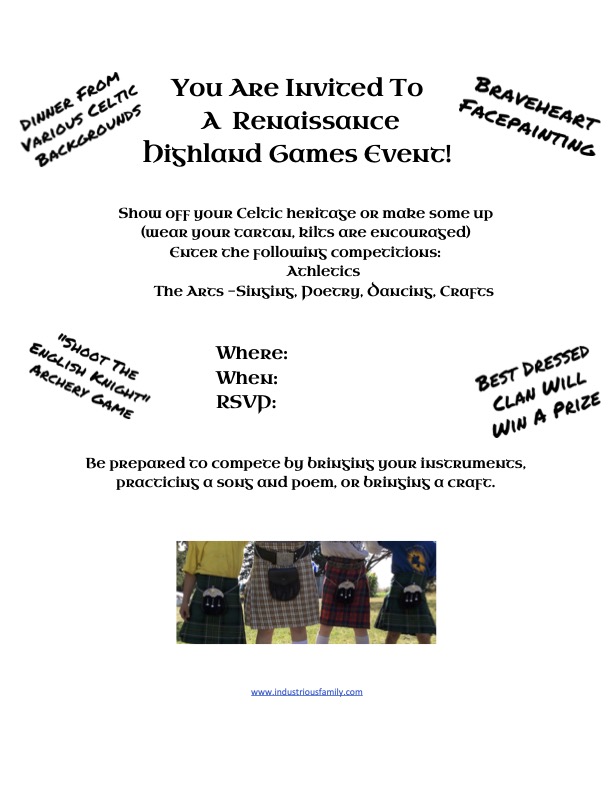 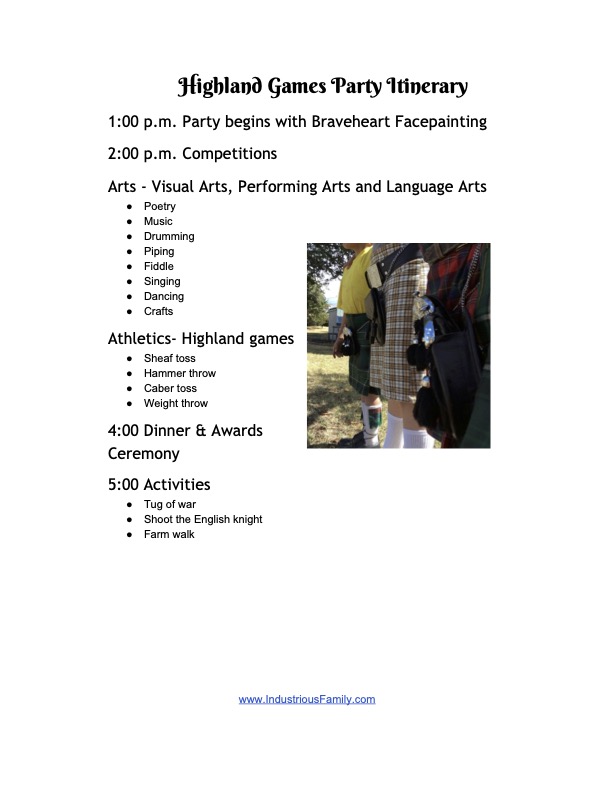 Encourage your guests to dress in kilts or at least in tartans or plaid by offering a prize for the best dressed clan. Be sure to mention this and that there will be competitions in your invitation so people come prepared. If you keep organized, your party will be a hit. A suggested itinerary is provided below for you to use and/or tweak to fit your party:

Outlaws of Ravenhurst Is An Inspiring Movie Young Audience Will Love! It Blends Adventure With Faith To Make A Movie Which Will Delight Viewers Of All Ages.

Outlaws Of Ravenhurst takes place in 1641 in the wake of the bloody Protestant Reformation when Catholics in Scotland were denied the right to true worship of God.

It reminds us of our past and encourages us to hope in the future, come what may. You can purchase physical copies of Outlaws of Ravenhurst to give as prizes. Visit our movie store to order your copies today! There is a discount for bulk orders.

You Will Never Experience A Dull Moment With Athletic Competitions, Performances, & Other Activities 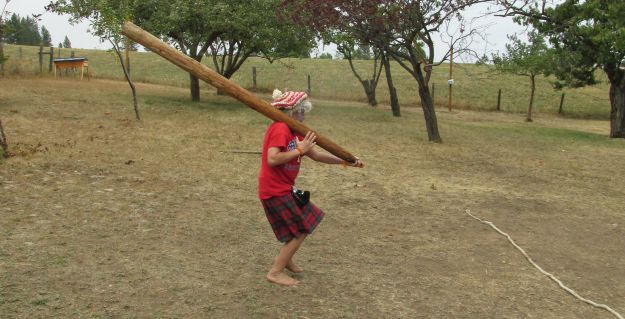 There are a lot of activities for this party so I've separated them into three groups:﻿

The athletics provide the action while the arts are included for entertainment. The activities follow dinner as a way for the party to wind down and end as you see fit.

The caber toss is my favorite of all the athletics. In the caber toss you originally take a 19 foot pole and try to throw it end over end, landing in a 12 o’clock position. This is obviously very difficult for a person who is 3 foot tall. Only very strong Scots can do this. To make this activity work, we watered it down to a 5 foot pole instead. This made it much easier for children.

The hammer throw is also a very fun athletic. In the hammer throw you try to throw a hammer the farthest. To suggest a safer game we used a rubber mallet instead of a hammer. We also made sure there were no people, buildings or animals in front of the person who was throwing. To throw the “hammer” we held the hammer as a baseball bat and, as we swung, we let the hammer go!!

The weight throw was mounds of fun. In the weight throw you again try to throw a weight the farthest. Originally the weight is 30 pounds. This game was also watered down to 15 pounds. We used a cast iron tractor piece. Cast iron is a very easy weight because even a small amount of it is surprisingly heavy. Do three counts. One...between the legs. Two...off to the side. Three...between the legs...and up into the air!

In the sheaf toss you try to throw a burlap sack filled with straw over a stick with a pitchfork. Whoever gets the burlap sack over the stick and the farthest wins!

The athletics we have adapted for this backyard highland games include:

The caber toss, hammer throw, weight throw and sheaf toss are all authentic highland games that are easily altered to fit any group of athletes.

Promote A Love For Culture And The Arts By Entertaining Your Guest With Craft Exhibits, Instruments, Singing, Dancing & Poetry Provided By The Each Other 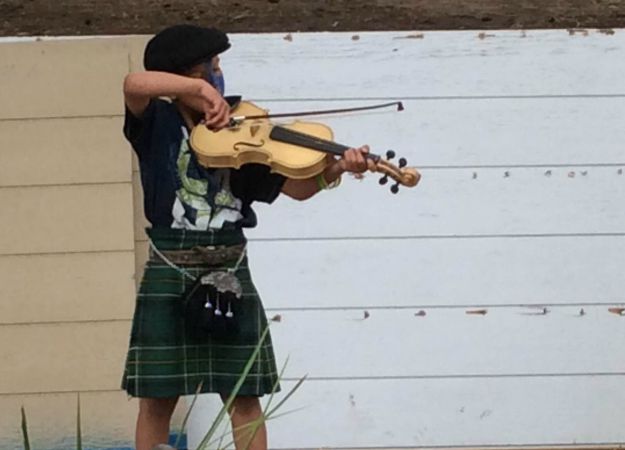 Whenever possible, promote a love and appreciation for the arts. A competition for the visual, performing and language arts is a perfect fit for this party. The arts make up a culture and this party is a celebration of the Celtic culture.

A craft competition is fun. Warn your guests ahead of time so they can bring a handcrafted item. Set up a table to display these items.

Any craft or work of art can be entered but some Celtic crafts that may be more likely to win include:

With the items laid out for display, a voting box can be provided and the item with the most votes wins.

Music, singing and dancing all fall in the performing arts category and provide plenty of entertainment for your guest whether they are watching or performing. Some particularly Celtic instrumental talent includes:

That brings us to the last two performing arts categories:

Any Robert Burns poem is a perfect fit. My Hoggie is easy to memorize and a cute poem to recite. As with all these competitions, let the experts as well as the novices perform. Lots of people and children especially will enjoy trying a new instrument. Give thirty seconds or a minute to each novice person. Enough time to let them try and yet not bore the audience. 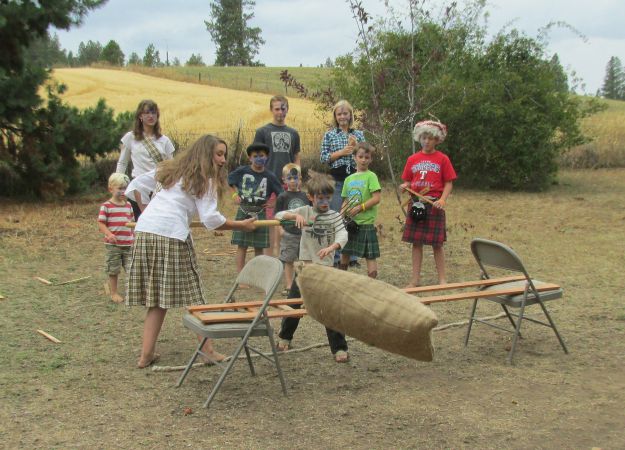 Save these activities for after dinner and after the awards ceremony.

Shoot the English Knight is an archery contest and a fun way to end your highland games party.  The equipment for this activity are:

Your target is the head of your English Knight that has been affixed to a straw bale. If like us you use real archery equipment, treat this like a shooting range and remind the participants of "gun" safety.

These activities are intended as a way of winding down after a long afternoon of sports and performances. Your party can end after these events or you may want to continue visiting into the evening in the living room or around a campfire.