In Fabiola, We Are Told Saint Agnes’ Story
As Never Before 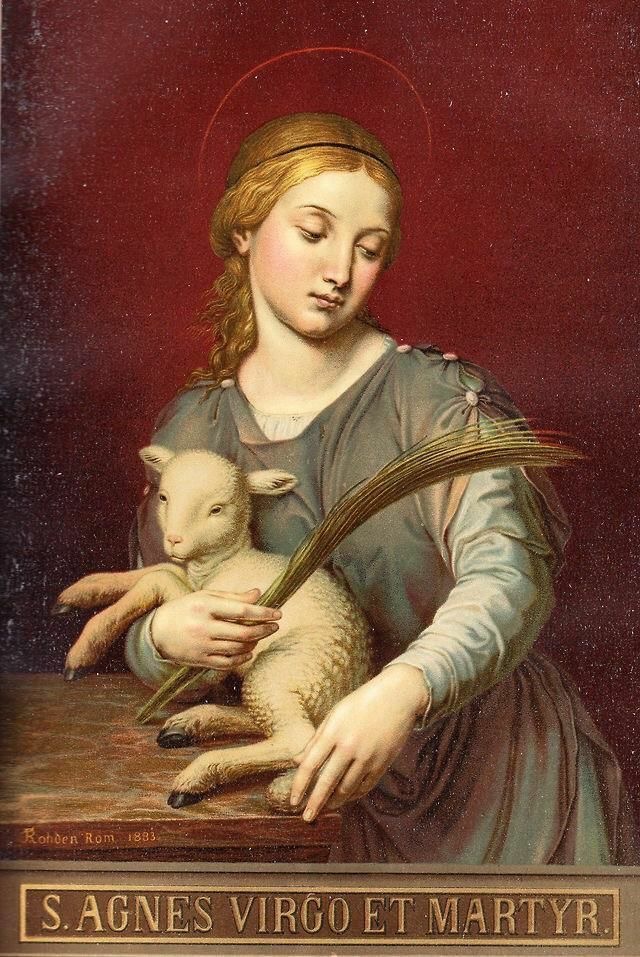 Saint Agnes comes to life in a wonderful way through Cardinal Wiseman’s novel, Fabiola. Cardinal Wiseman places this famous early Church martyr into his story as the young, Christian cousin of the main character, Fabiola.

Although several years older, Fabiola looks up to Agnes as her role model, deeply admiring her saintly cousin.

Industrious Family Films has dreams of bringing Fabiola to life in a moving miniseries.

For the Fabiola pilot we have decided to script a single scene which carries the plot without spoiling the story. In short, we have chosen the climax.

As the scene opens, Saint Agnes who will be beheaded in a few hours, her doting cousin Fabiola, and Agnes’ accuser, the foreigner Fulvius, whose desperate situation has brought him as low as to turn Agnes in for her inheritance, all stand in a dark cell.

Agnes is turned over to the tribune after refusing Fulvius' suit in honor of her vow of virginity. The day before her martyrdom, Agnes begs Fabiola to apply herself to the saving doctrines of Christianity.

A door is thus opened to Fabiola's mind, who admires Agnes' virtues. With all the popular prejudice against the Christians of the time surrounding her, Fabiola never assumed that Agnes' virtues are credited to her Christianity.

Bring This Story To Life!
Donate To The Fabiola Pilot Today!

Saint Agnes' Child-Like Bravery In The Face Of Death Will Inspire You!

The above scene is the one which we will present in our pilot. Agnes has waited for the final hours before her death to tell Fabiola what a wonderful Christian she would make. 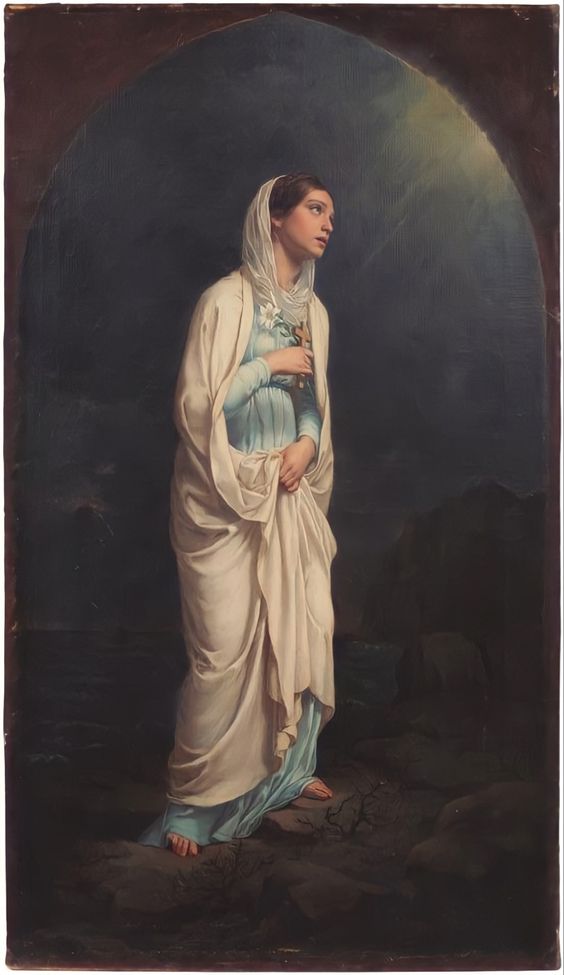 After first appraising Fabiola's natural virtues, Agnes imparts to her affectionate cousin the glory that grace will add to these natural gifts.

Fabiola promises to apply herself to the Faith, after which Agnes happily goes to meet her Bridegroom, satisfied that she has brought Fabiola to the True Fold.

In the cell, Agnes shares with Fabiola her eager desire for martyrdom:

Behold, what I have long coveted, I now see; what I have hoped for, I hold safe; to Him alone I feel already associated in Heaven, whom here on earth I have loved with all devotedness.

One of my favorite resources for reading about the lives of the saints shares the words of St. Ambrose when he speaks with great admiration of Saint Agnes, who was martyred at the tender age of 12.

In his work, On Virgins, he wrote:

“This is a new kind of martyrdom! One not yet of fit age for punishment, but already ripe for victory. One unready for combat, but able to win the crown. One who has not yet reached the age of judgment but who has mastered virtue."

It is this character that Fabiola admires as a role model. Her childlike bravery in the face of death is truly inspiring!

Your Gift Of As Little As $3 (The Price Of Renting A Movie) Will Help Us Begin Shooting This Scene.
Support The Fabiola Pilot Now!

And Now One Of My Favorite Parts Of Film, Pre-Production: Casting And Costuming The Innocent Saint Agnes For The Fabiola Pilot

I have already casted Saint Agnes in my mind but for this film, I do not get the final decision. This will go to the producer's court. But I have put my candidate before the producers and they are considering her.

I had a lot of fun brainstorming this damsel's costume! This is one of my favorite parts of pre-production. 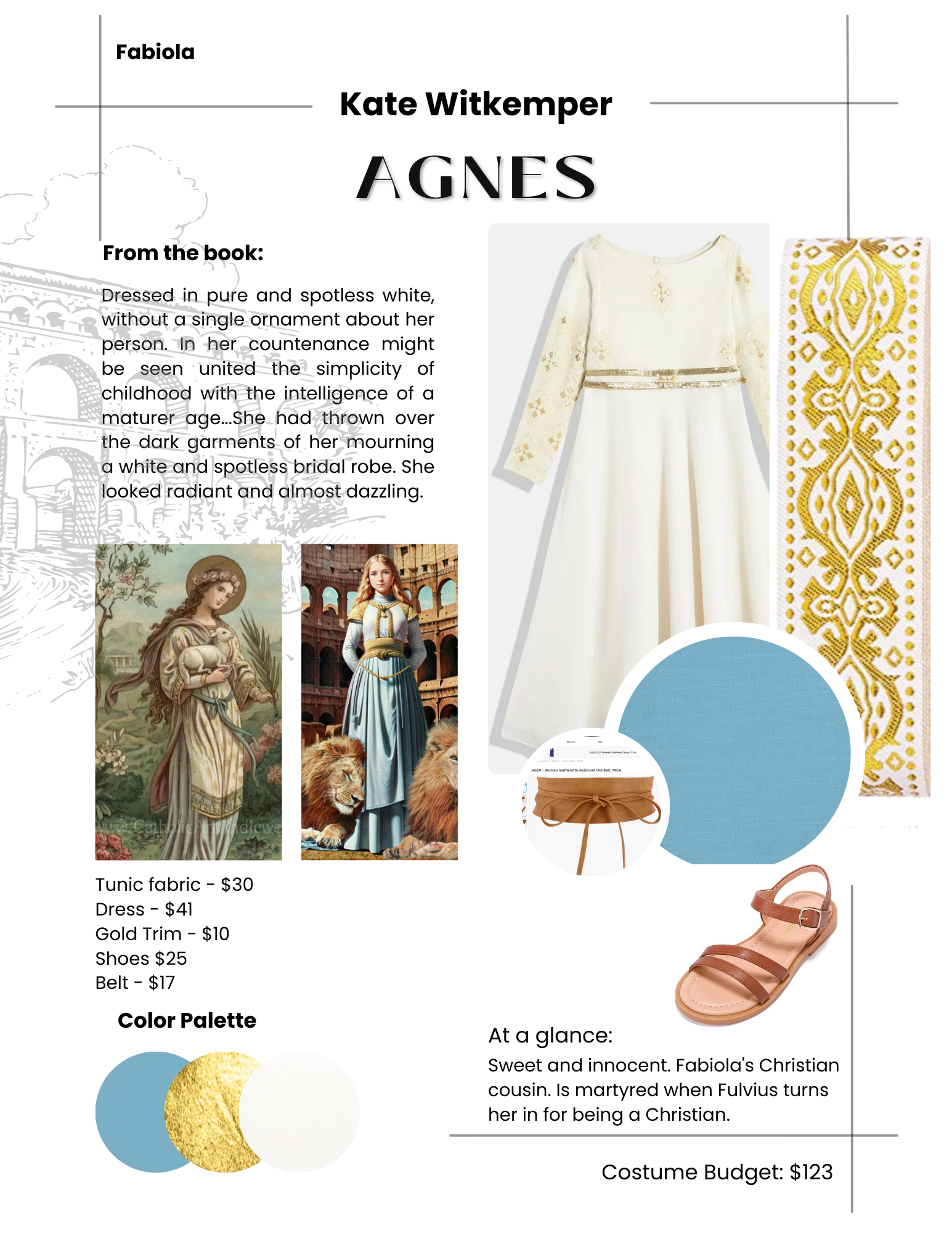 We stepped up the game by creating "Character Boards" where we use examples of paintings and images that we would like to copy as inspiration for our character's costume.

Then we add a color palette by using hues which help bring out the character’s personality. Using such a detailed novel as Fabiola, we also included the author's description of the character's appearance.

"Dressed in pure and spotless white, without a single ornament about her person. In her countenance might be seen united the simplicity of childhood with the intelligence of a maturer age...She had thrown over the dark garments of her mourning a white and spotless bridal robe. She looked radiant and almost dazzling."

Naturally, we found a few nice white gowns that highlight this saint's purity to choose from, which we would like to accent with minimal golds and blues.

If you agree this story needs told, please donate to the Fabiola drive today. Every bit counts. After making your gift please consider sharing this web page with anyone else you can think of, especially any with a special devotion to Saint Agnes.