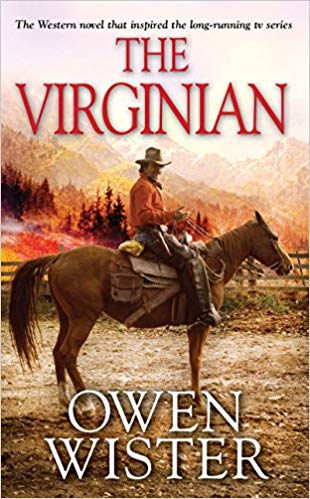 The cowboy has become America’s Roland. Even though the youthfulness of the New World provides four centuries which separate the Old World heroes from the cowboy, the admirable qualities in a not-so-perfect man continue to intrigue us.

The legacy of this horse-riding, cow-punching, fast-drawing personality is greatly due to the first Western ever written, Owen Wister’s The Virginian.

“The Virginian is nothing more than a portrait of the American Hero in all his natural grandeur,” Robert Parker remarks in the introduction of the Signet Classics’, copyright 2010 edition, “He is not good because he lives in the West. But the West is where he is able to make his heroism manifest.”

It is the manifestation of natural virtues that has lingered longest and deepest in the American imagination and this memory owes its existence to The Virginian.

Wister has chosen Wyoming to be the Virginian’s turf. The reader enters this cattle land of desolate deserts and rocky mountains between the years of 1874 to 1890. The wind blows about an air of gentle adventure and an under current of romance.

Three main people’s paths cross between the plains and the sky. They include the nameless hero; the cowboy who matures in manhood and fosters natural virtues under the generic name of the Virginian. The hero’s prize to be won is the new school teacher from the East, Molly Wood, while the character Trampas serves as the hero’s adversary and nemesis.

The Virginian has a humorous and playful side but in the blink of an eye he can be serious and businesslike. Justice, prudence, temperance, and fortitude are some examples of natural virtues displayed in the Virginian. Aside from his slightly wild and childish nature, the Virginian is a real man and a true gentleman.

While far from perfect, there is nothing evil in the character makeup of the Virginian. In the years spanning the story, the Virginian progresses with age in maturity and virtue. This is mostly due to the people he encounters. He trains himself to be worthy of the new school teacher, Miss Wood, while resisting vengeful inclinations toward his detractor, Trampas.

In like manner, Miss Wood is matured by the Virginian. By knowing the Virginian, Molly becomes a true woman. In the beginning of the story, Molly Wood is sort of an independent feminist. Molly wants to imitate her strong-willed, proud grandmother.

The Virginian gently shows her how her attitude looks on the outside by comparing her to a demented hen named Eml’y. This hen never lays her own eggs but tries to hatch potatoes and soap balls. Likewise, she will mother anything from turkey chicks to puppies.

Molly does not like how the hen is portrayed but she sees that she too is fighting her nature and should not be unsettled and satisfied raising other people’s children.

Molly thinks that she has built a wall of resistance to the Virginian because she wants to prove to her family that she is strong enough to make it on her own. In the end, she admits that the Virginian has won her heart and that she loves him for his virtues.

Trampas thrives on jealousy, pride and arrogance. Trampas entices honest men down the wrong path because he provides them with the opportunity to choose evil. A simple fool named Shorty falls easy prey to Trampas when he entices Shorty to be his accomplice in cattle-thieving. “Trampas had enticed Shorty away from good, and trained him in evil.”

Even though Shorty follows Trampas like a lost dog, Trampas proves not to be a true friend of Shorty as this acquaintance costs him his life.The conflict between the Virginian and Trampas is simply that the freedom to shape your own character does not always guarantee that it will be molded in nobility and heroism.

A quality that Trampas draws out of the Virginian is that goodness is possible if you have the opportunity to choose evil and are able to resist the temptation.

Owen Wister’s style of writing is very unique. He wrote The Virginian in first person but some chapters happen when the narrator is not present which makes the novel a little disjointed.

This true-to-life novel made me muse on the hidden virtue that we find in surprising places. Even though people have their shortcomings, they possess a divine spark of goodness somewhere deep inside them. The Virginian helped me apply this to life and the world.

The Virginian was the kind of character that Fr. Garesché referred to when he wrote, “No human being is quite ideal, but every one has some divine spark of goodness in it” and that “men and women are under such severe strains and temptations that even a little virtue in them is really quite honorable.”

Mary Bowen is a founding member of industriousfamily.com. Not only is she our resident artist but she is also a choir director, GAPS dessert guru, Angora lover, and director at Industrious Family Films. Always cheerful and optimistic, Mary loves sharing her gifts with others. She has walked the Chartes pilgrimages twice and hopes to go as often as is realistic. Her first movie, Outlaws of Ravenhurst premiered in 2018.

Enter your email address to subscribe to this website and receive notifications of new articles by email. Join 65 other subscribers.