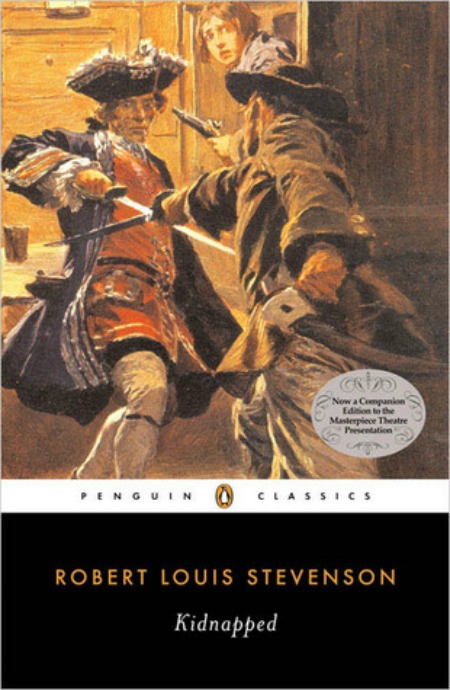 "Even though you are on the losing end of an argument, it is good to stick to your principles."

In the book Kidnapped, by Robert Louis Stevenson the reader is swept to Scotland in 1751, six years after the Jacobite uprising.

This 230 page adventure novel, published by Dover, copyright in 2000, tells the story of David Balfour's adventure as he travels through the lowlands as well as the highlands of Scotland with the outlaw Alan Breck Stewart.

Although the two have nothing in common they manage to build a unique friendship.

This LibriVox recording of Kidnapped is very good. First it is a good length and can be listened to while driving for a long trip totaling about 8 hours. It is recorded by one person. He had good voices for each of the characters plus his Scottish brogue was good and he pronounced Scottish words well. The speed of the recording is good and there is no background. The recording is very clear. Excellent quality.

This story takes place in the lowlands and the highlands of Scotland. The characters travel on land and sea as well as islands.The Jacobite Uprising is just getting settled down in 1751, with Scotsmen separating themselves into two groups.

Jacobites live as Scotsmen loyal to their “Bonnie Prince Charlie” who is living in France. The highlanders seem to have their own laws and follow their chieftains instead of the government. While in the lowlands, the Whigs are loyal to the English king. The reader also gets a glimpse of the solitary islands and the wild and dangerous Scottish sea.

This story is an adventurous epic. It introduces the reader to many characters while covering a large setting. The story is also a historical drama as it recounts real events such as the Jacobite Uprising with realistic characters.

David is a young orphan who is a Protestant Whig. His target is to find his father’s estate. After being kidnapped by his selfish uncle, David finds himself getting farther and farther away from his goal.

Alan Breck Stewart is a Catholic Jacobite as well as a highlander. He has many skillful talents such as sword fighting, piping, singing and finding his way in the mountains while dodging red coats. He has fought in France and returns to Scotland as a hunted man. His duty to his clan is to bring the rent from his chieftain to Bonnie Prince Charlie in France. Although he has many good traits Alan is quite vain and gets offended easily.

An Inheritance, A Kidnap, A Murder

After David’s father dies, David finds out that he is a man of rich descent and has a title to a large piece of land called Shaws. He is determined to go and claim his estate. But it comes out that he has a misery uncle who is the Laird o’ Shaws. Ebenezer Balfour is not going to give David the estate easily and is sure and determined to get rid of David. So he pays to have David kidnapped and taken to Carolina to be sold as a slave. Working as a cabin boy for the captain of the ship the Covenant bound for America, David is not the only one who is in danger.

Being the only survivor of a shipwreck, Alan Breck Stewart finds himself with rough men who are willing to murder him for the sum of money he has on him. Here he meets David and together they decide to help each other out of the danger they are in. The two face shipwreck, are separated and find eachother again in an unhappy circumstance. Alan and David find eachother seconds after the murder of Colin Roy Campbell. David recalls Alan’s words of hat to Campbell, “If the day comes, David man, that I can find time and leisure for a bit of hunting, there grows not enough heather in all Scotland to hide him from my vengeance!” After a small quarrel Alan proves to David that he did not kill the Campbell and they continue their adventures together.

Both being suspected for the murder, Alan and David “take to the heather.” Dodging red coats and using secret hiding places, Alan and David finally make it to safety in the lowlands. Here Alan helps David get his estate before he returns to France.

The characters teach the reader loyalty, courage, forgiveness of enemies and friendship. Although David and Alan had many differences they stayed loyal to their political parties. The book also portrayed that even though you are at the losing end of an argument, it is good to stick to your principles.

The highlanders showed a courageous spirit as they faced hardships. In the book David wished to get back at his uncle, but in the end he forgives Ebenezer all his wrongs. David once said to Alan, “Opinion here or opinion there, it’s a kent (known) thing all Christianity forbids revenge.”

David and Alan built a strong and unique friendship that never wavered despite their many differences. Loyalty, courage, forgiveness and friendship linger in the reader’s mind and help inspire him to develop these traits in his own life.

I liked this book because I am of Scottish decent, and I learned a lot about the Jacobite Uprising of 1745. It also made me curious whether my family were Whigs or highlanders. I am proud to say they were highlanders. I really liked it also because Alan is hilarious as he praises all his talents and annoys David. One time Alan congratulates himself for his fighting skills by asking David, “Arn’t I a bonnie fighter?” I liked how the last few chapters are filled with suspense as David tries to get his estate.